ok, day of murder with pain the computer while we return to install Office 15. But to pass the time, will close some of the ideas that emerged yesterday in a twitter conversation with @jc_quijano @pablonete @luisruizpavon. The question was where we can reach with the new local Workspaces have been managed in Visual Studio 2012 and Team Foundation Server 2012.

We are going with a bit of history first. The concept of local Workspace was created to put an end to the hell of the offline mode we have with TFS up to 2010 version. While it is true that offline mode is much improved in TFS2010, control of modified files and other types of actions is continuing through File System attributes. The best example is the “not modified” files are marked “Read Only” and if you want to modify them in an offline mode, since it has remove this attribute, modify and cross fingers when you again connect to TFS you recognize the changes. Scenarios “more complex” as for example, Rename a file required to perform unconventional rituals in order to put these changes in TFS. (not to mention sacrificing a Virgin albina in a day of eclipse on a 7-pointed star but it is almost equally complicated )).

As well, friends of Redmond decided it was time to put an end to this suffering and TFS2012 have completely changed the model. Let’s look at an example. The following image shows the configuration of a workspace called “W8RC-BRUNOC-LOCAL” which is a LOCALtype. In addition all the source control of the Project team that I used for the webcast of team foundation service, as is mapped to the path [C:\srcElBrunoLocal].

On this route we find that in addition to the own Team Project folders have a system folder called [$tf] which is which stores the changes that we then compare them with the initial States and to synchronize with the TFS server.

Clarification: While at first glance this is very similar to the behavior that has subVersion, then matches only that there is a folder with changes, nothing else.

Well well, what can you do now? because if we disconnect our server Team Foundation Server 2012 and see the properties of a class within this local workspace, see that…… Finally! files are not marked as ReadOnly.

Moreover, if you edit this file with notepad and open Visual Studio 2012. Although we are disconnected from TFS, we can perform offline actions in the Team Explorer pane: 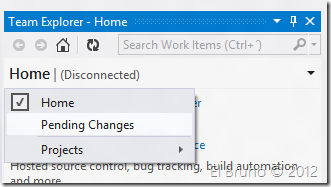 In view of Pending Changes will see how this file is displayed and edited.

And now, we got to the goal of this post: what can we do at this point when we work with local workspaces? .

Clarification: beware this last option, I reserve it for an upcoming post

Yesterday the conclusion was quite clear in the tweet

But this opens a door to many assumptions, for example Ms is working on a distributed like GIT or Mercurial SCM and may incorporate it in a future release. For now there is nothing (or not I have updated well my VS2012), but the truth is that the new offline mode is appreciated very much.

PS: by the way if anyone is bored I invite you to see the contents of the directory [$tf] > > back to hell!